Content warning: the below includes racial slurs, mentions of CSA, and extremist bigotry, including racism, antisemitism, ableism, homophobia. We have collected a large number of posts by McNamara, what follows is a representative sample. 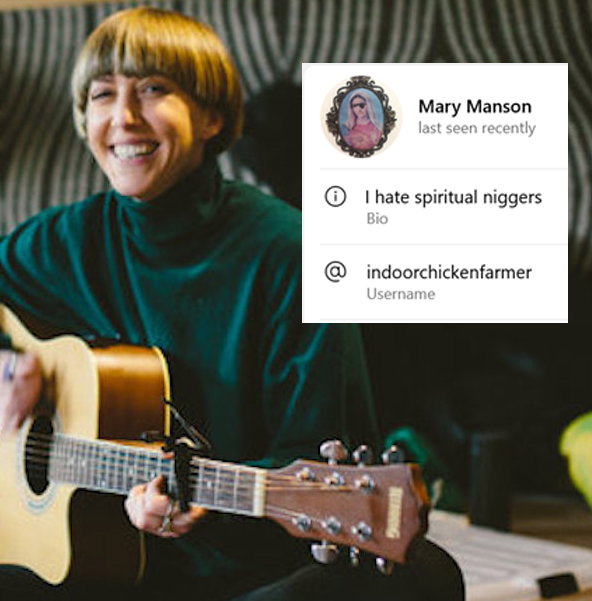 The Age have reported yesterday:

Another anti-lockdown promoter has been unmasked as Alice McNamara, a musician who runs a children’s music business, KiddyRock. Ms McNamara, who has been posting neo-Nazi and anti-lockdown propaganda under an online alias, hung up the phone when contacted.

This seems unbelievable to those who knew her personally as Alice, or as Ally Spazzy from the mid-2000s pop punk band The Spazzys.

McNamara has been a prolific member of the flourishing conspiracy-driven anti-lockdown movement since the start of the pandemic. Our investigations show, however, that her views predate 2020 and that she regularly shares abhorrent racist and white supremacist views in blackpilled accelerationist groups. This is a shocking contrast between her public persona and her work with children.

As 'Mary Manson', however, McNamara doesn't hold back: 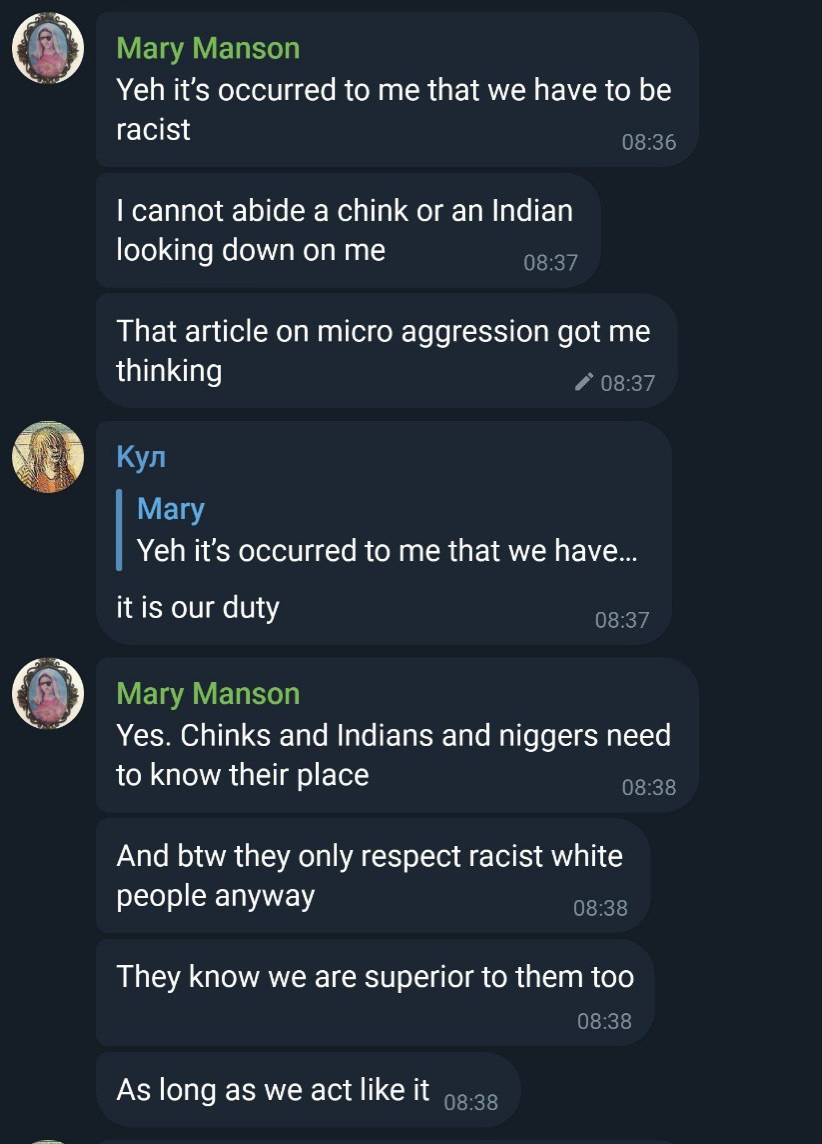 McNamara is referring to an article from a fascist publication that describes how to have fun while using racist microaggressions in the “war on coloured people” in the workplace. It includes advice for causing maximum upset and offence but staying on the right side of the law. There are suggestions for how to make fun of people's names, cultures, backgrounds and food while maintaining plausible deniability.

McNamara's response? “Lots of great advice and tips in here!” 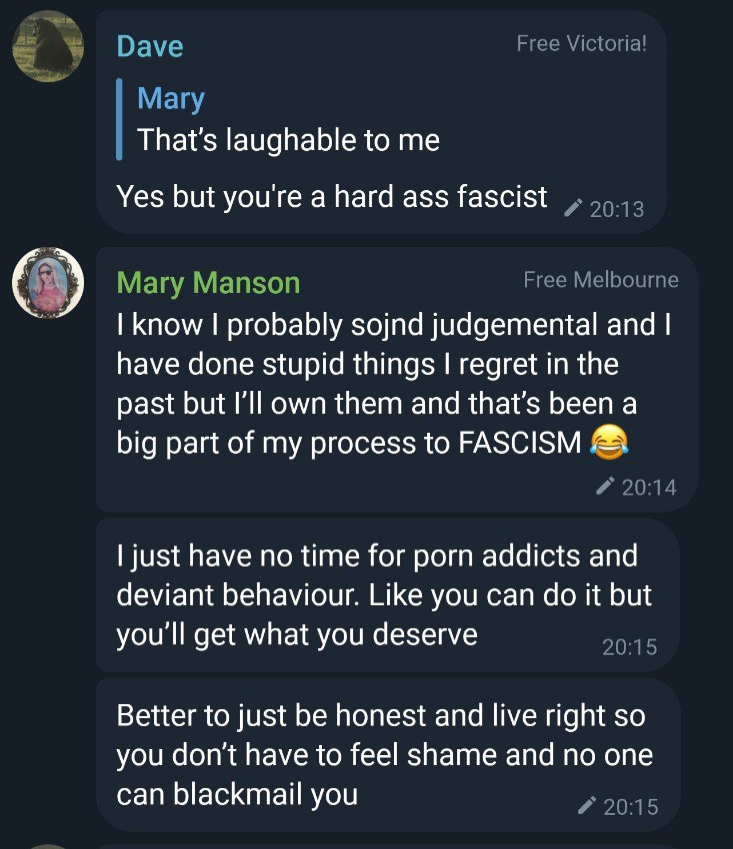 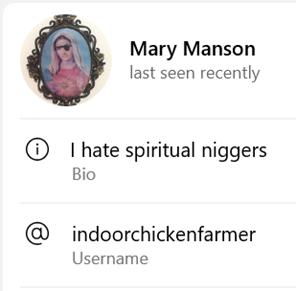 On the one hand, 'Mary Manson' is a typical anti-vaxxer. She's made posters for protests, medical exemption letters, attends protests and boasts of not wearing a mask. 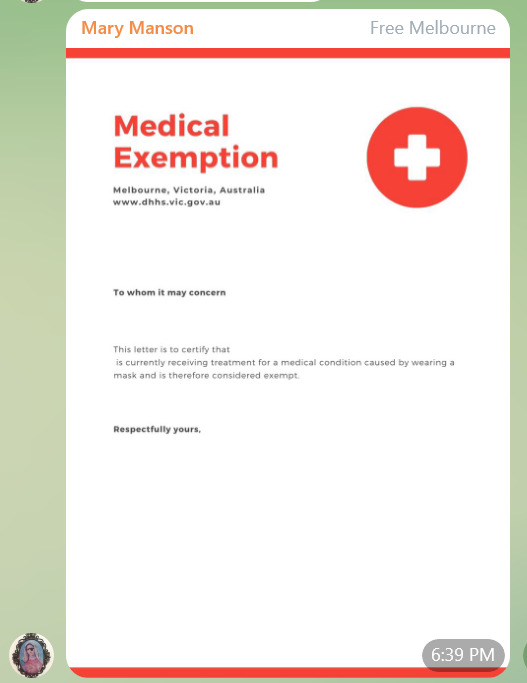 But she also hates Jews, denigrates lesbian parents, and promotes Siege, the notorious and influential accelerationist text by child pornographer neo-Nazi James Mason. This text has inspired some of the most extreme violent far-right terrorist groups in the world today. 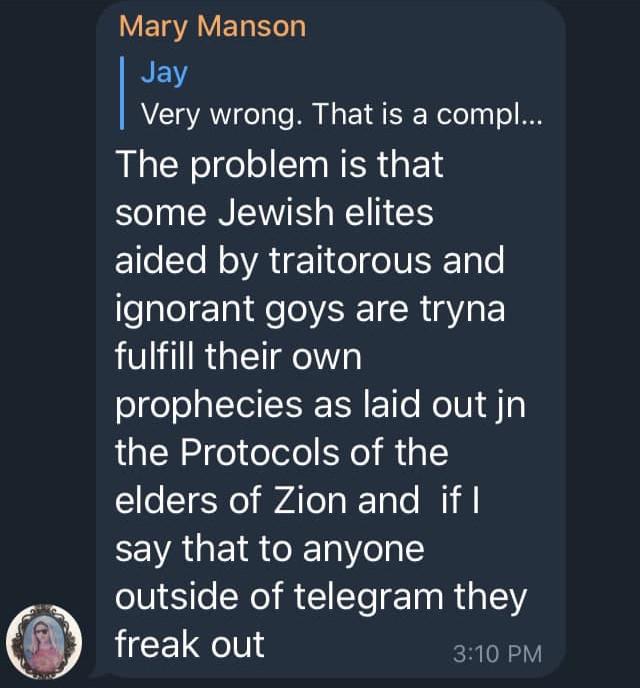 'Mary Manson' has also talked about the benefits of showing children an American neo-Nazi story book. This is a serious concern as 'Mary Manson' has access to children through her small business providing musical education to children. She also did childcare for a doctor once her business was closed due to lockdowns. 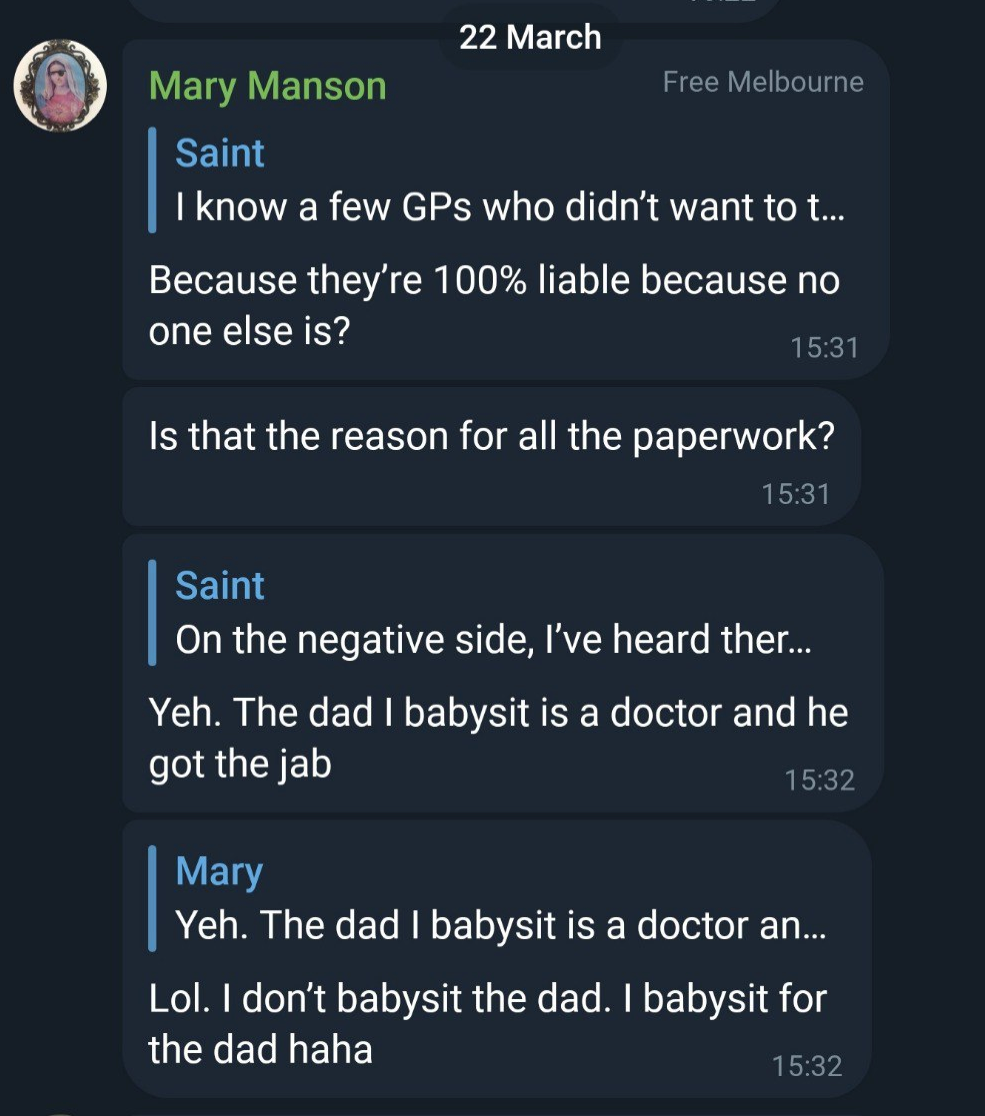 But how do we know 'Mary Manson' is really Alice McNamara?

We first noticed 'Mary Manson' in Proud Boys chats as a Holocaust denier: 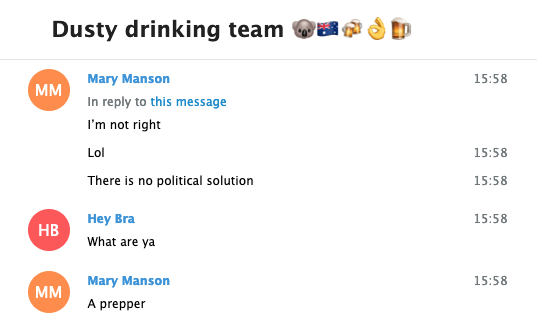 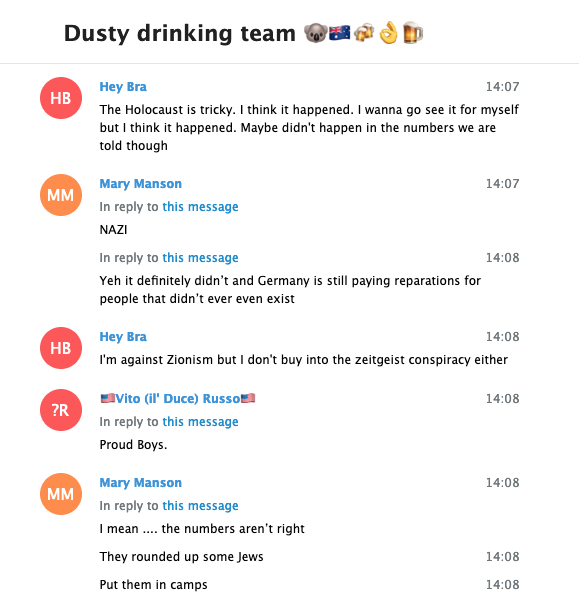 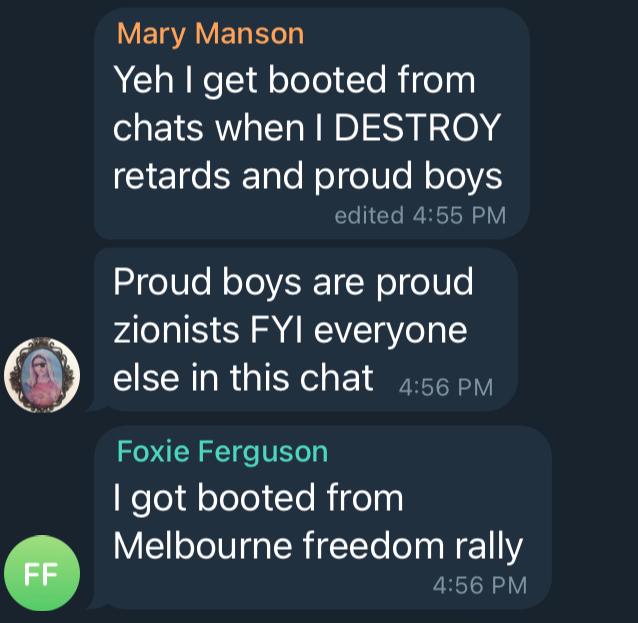 We then we saw her taking a prominent role in some Melbourne anti-lockdown chats. And we tracked her to neo-Nazi online spaces. Over the last 18 months, we have collected a multitude of data points. We know many people will be shocked by our information and we take the task of proving her identity very seriously. Below we show some of our evidence.

By going through her posts, we were able to identify a number of matching data points between 'Mary Manson' and McNamara: both were women living in Melbourne, both owned a small business providing musical education to children, and both had connections to the Australian alternative music scene.

In one post 'Mary Manson' remarks with surprise that Australian music broadcaster Jane Gazzo had joined one of the more antisemitic Telegram chat groups in the Australian anti-lockdown online environment.

At the time she posted this, the most recent poster in the Covid 19 Truth Group chat was Jane Anderson aka Calamity22: 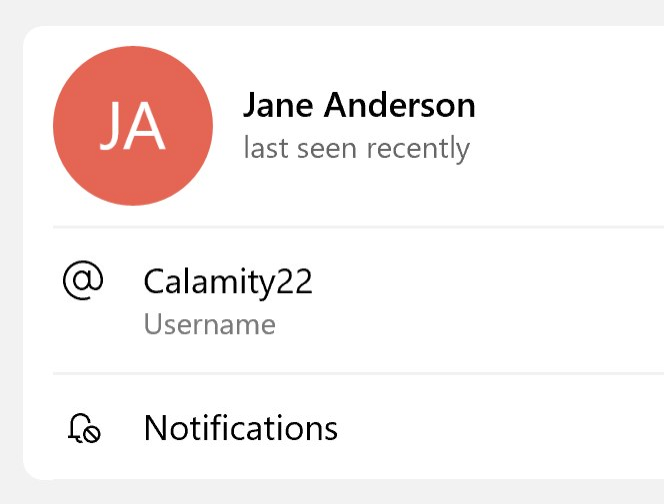 Jane Gazzo has published in the past using the nom de plume Calamity Jane.

'Mary Manson' explained to others in the chat that she knew 'Jane Anderson' was Gazzo because she had her number saved in her phone – Telegram's settings mean that contact names in your device will supercede a person's chosen display name.

We are not suggesting that Gazzo has posted antisemitic content, indeed her edgiest contribution to the Australian anti-lockdown space was a declaration that she had travelled on a tram without a mask.

In other postings, 'Mary Manson' identified a number of Facebook groups she had joined. We discovered that Alice McNamara was a member of each of these groups.

'Mary' and Alice also shared some other data points. Out of respect for McNamara's family, we have left some sensitive personal details out.

But it was the metadata from anti-lockdown propaganda she created that provided the definitive link. Using publicly accessible data, we were able to cross-match metadata in documents made by 'Mary Manson' to Kiddyrock, the business registered to Alice McNamara.

There is no doubt that 'Mary Manson' is a pseudonym for Alice (Ally) McNamara.

How did McNamara get radicalised?

It was only six short years ago that Alice McNamara was performing anti-racist anthems at the Community Cup. How did she go from performing Blackfella/Whitefella to becoming a Siege-pilled neo-Nazi?

We can't say for sure but one clue might be on an old YouTube profile, where Alice had subscribed to the channel of anti-feminist YouTuber Carl Benjamin (a/k/a Sargon of Akkad).

In one discussion, 'Mary' references having dropped a supposed truth-bomb about feminism onto a shocked and awed social media audience. Everybody clapped.

In other conversations with members of the far-Right, she makes reference to watching the videos of far-Right pastor Jesse Lee Peterson. It seems probable that McNamara simply followed a well-worn path down the YouTube rabbit hole. She's certainly not the first musician to travel this path.

Members of Alice McNamara's old band The Spazzys have now issued a statement about Ally's views. 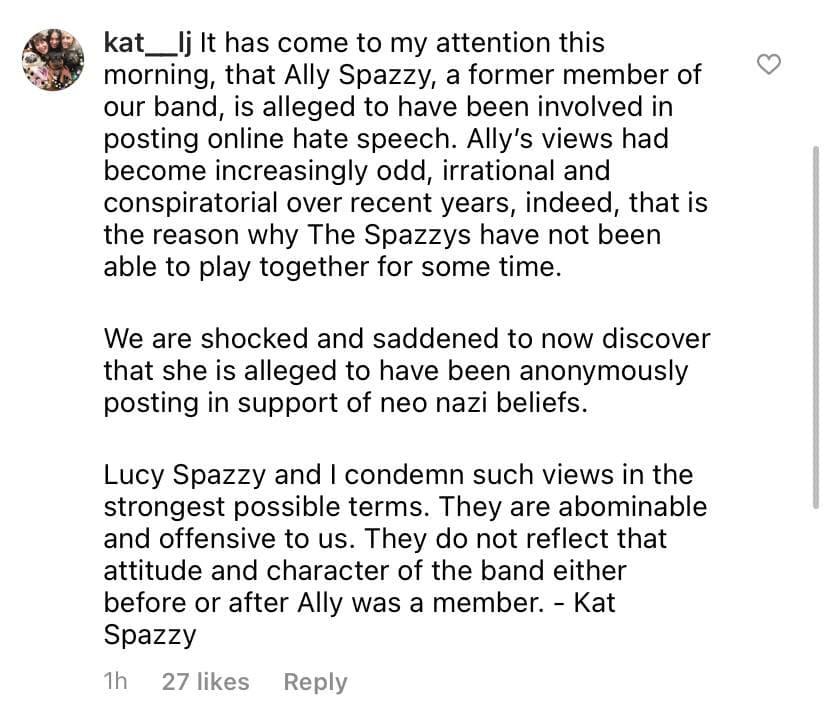 We send our best wishes to the remaining band members. We release this information as a public service especially for those parents who entrusted their children to someone concealing their real abhorrent opinions and political standpoint.

Calling for Proud Boys to join the anti-lockdown protests, which later happened 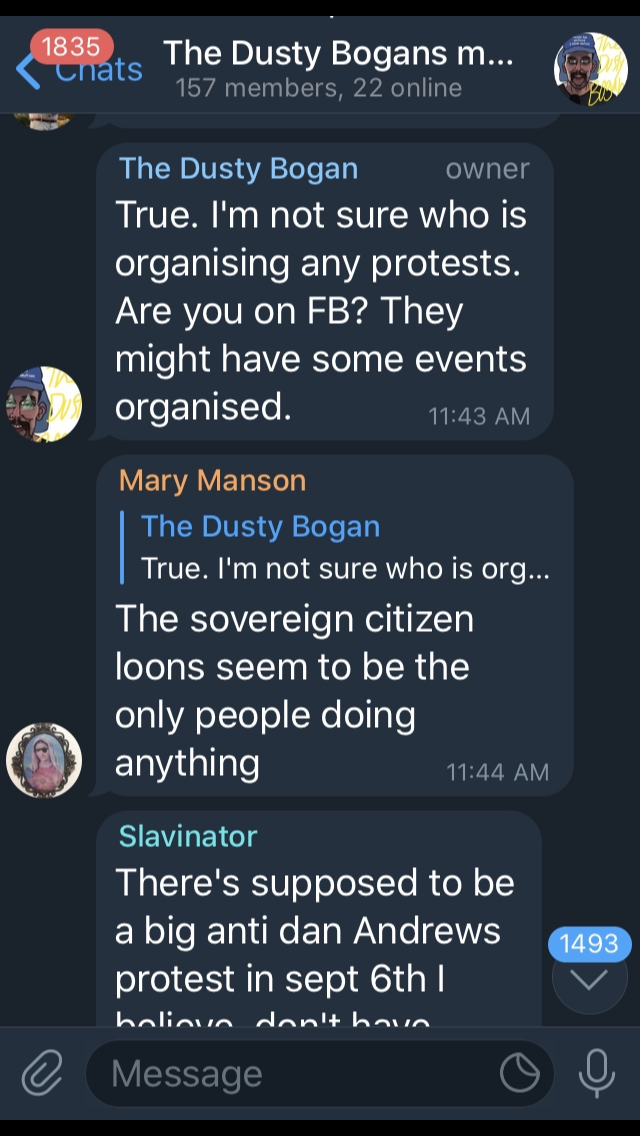 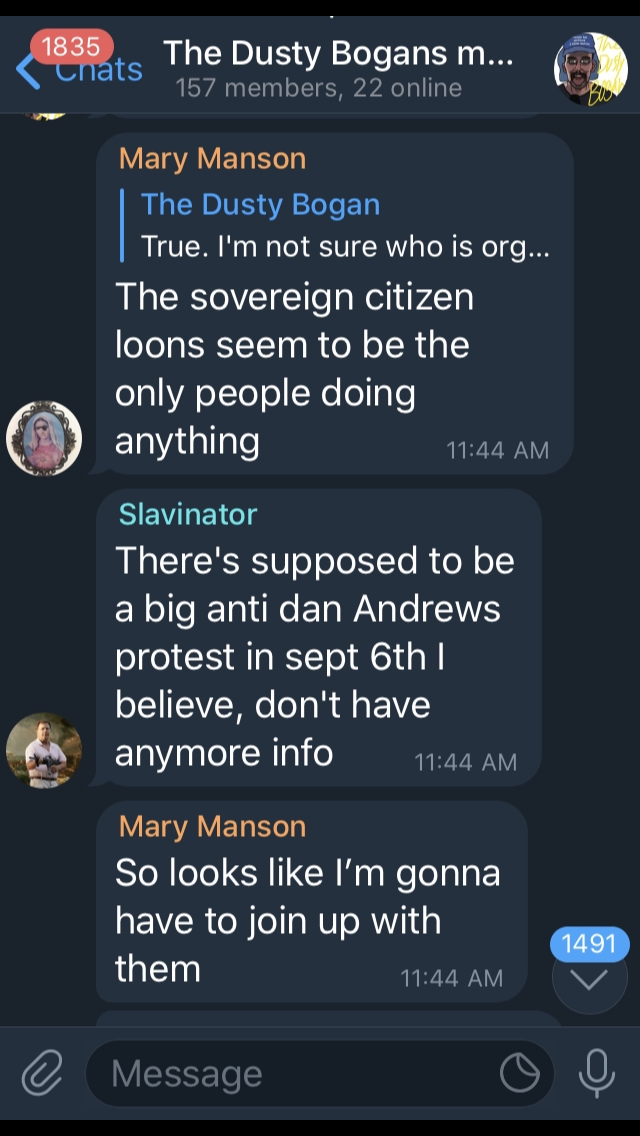 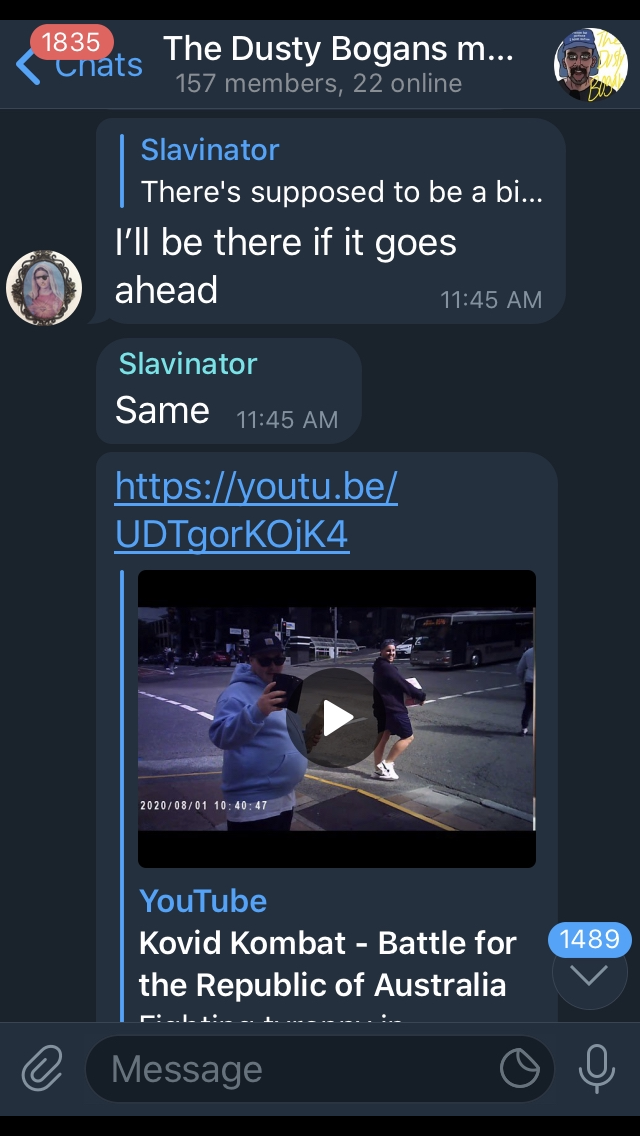 In anti-lockdown groups, 'Mary' would promote the infamous neo-Nazi text 'Siege' by convicted child pornographer James Mason. Siege promotes the idea that leaderless terrorist cells are necessary in order to bring about a White revolution. 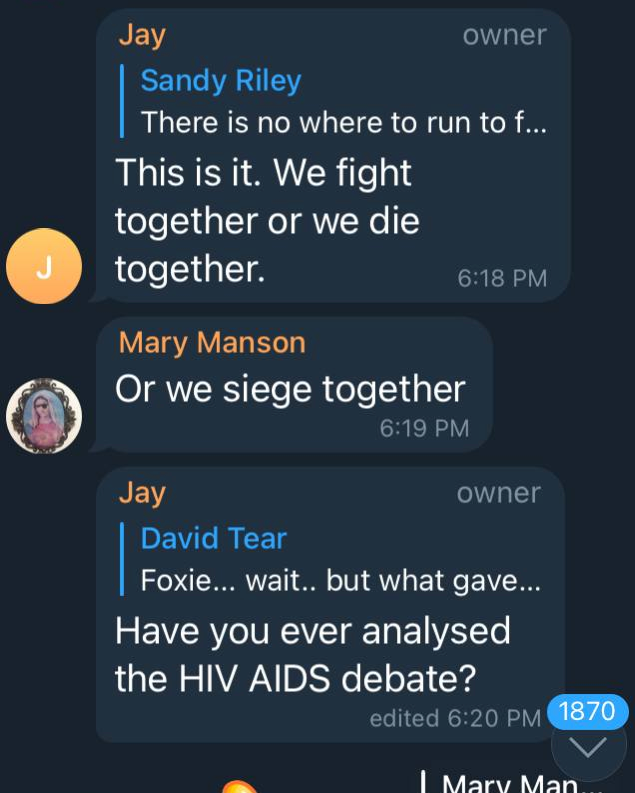 In neo-Nazi chats, 'Mary' expressed her love of reading in other ways, suggesting that other neo-Nazis might find some value in showing children a book by American Nazi Party founder George Lincoln Rockwell 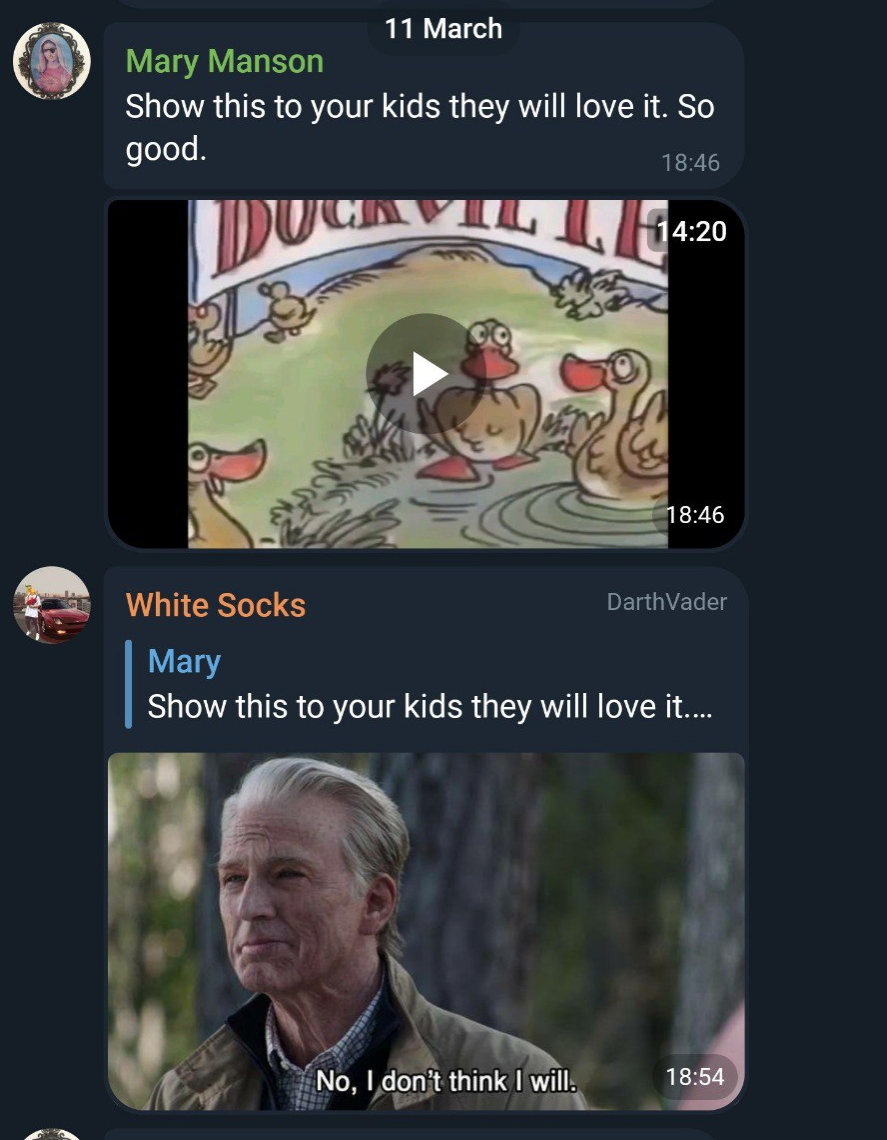 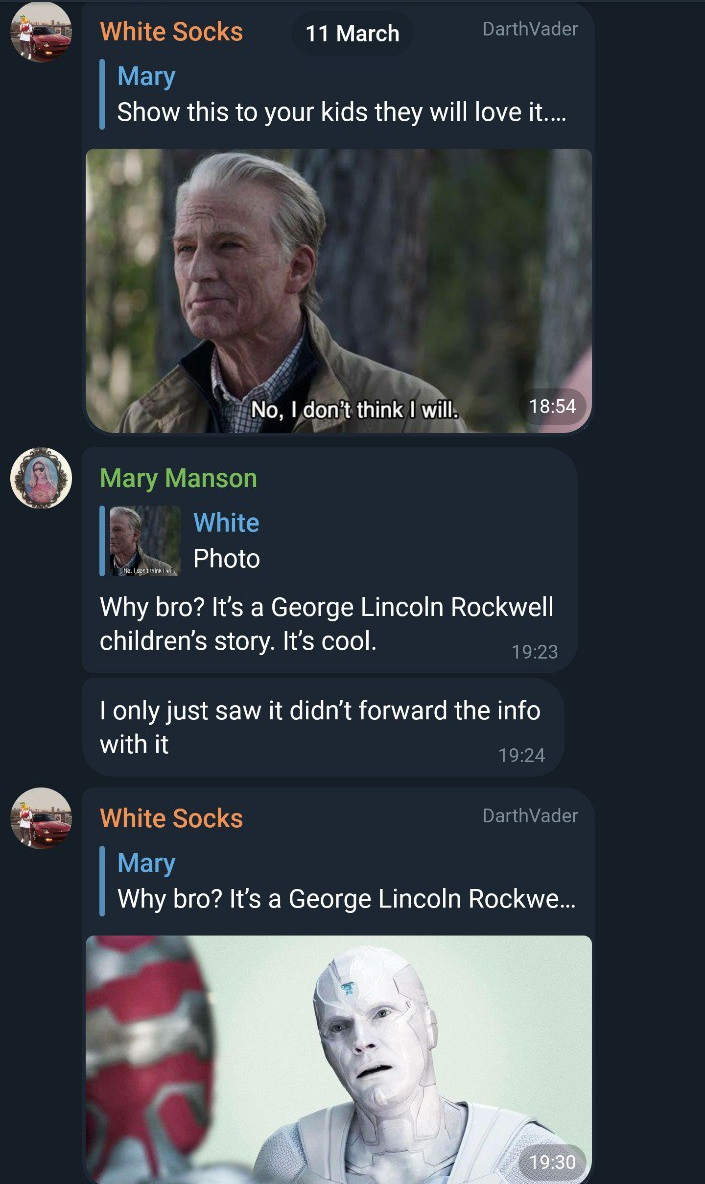 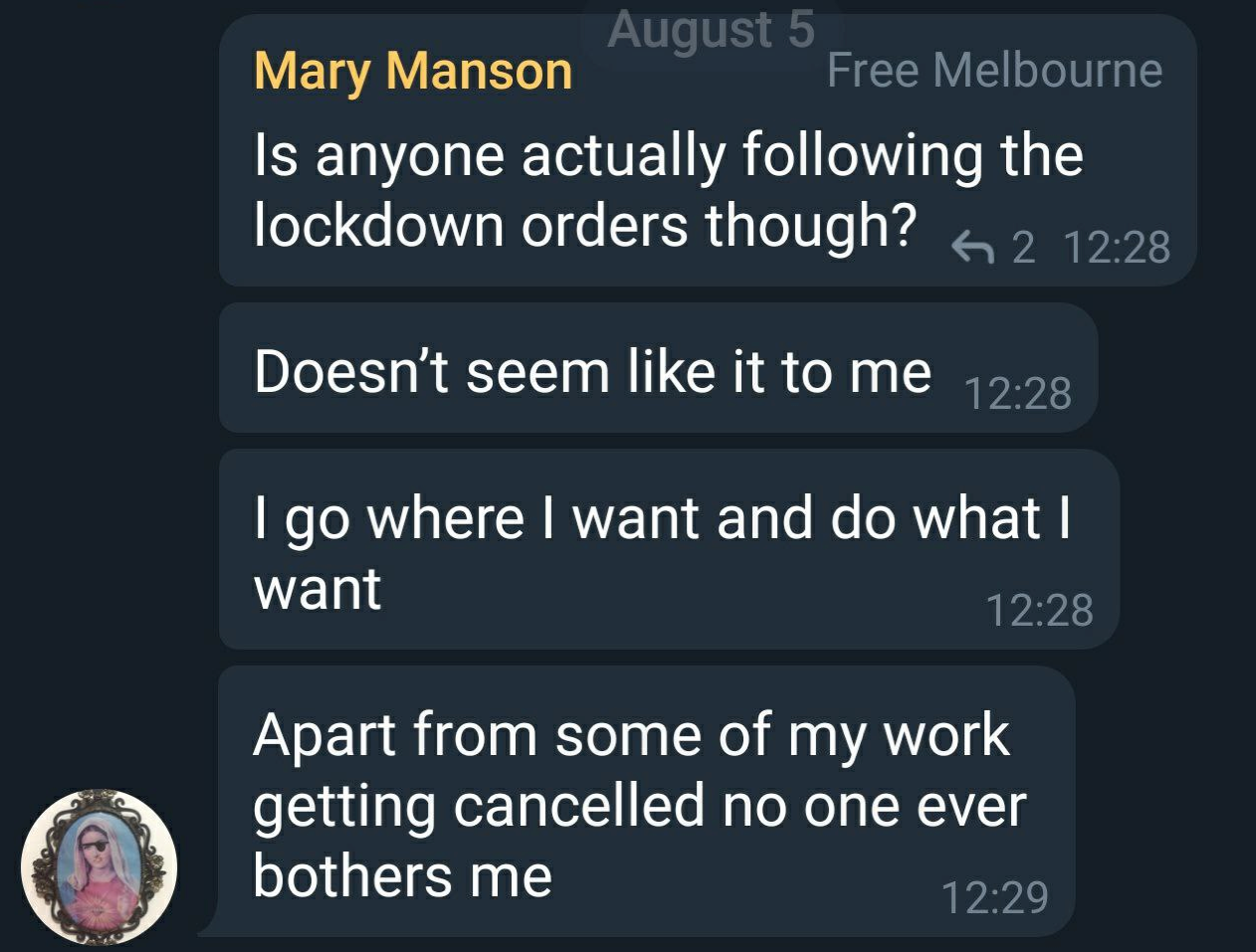 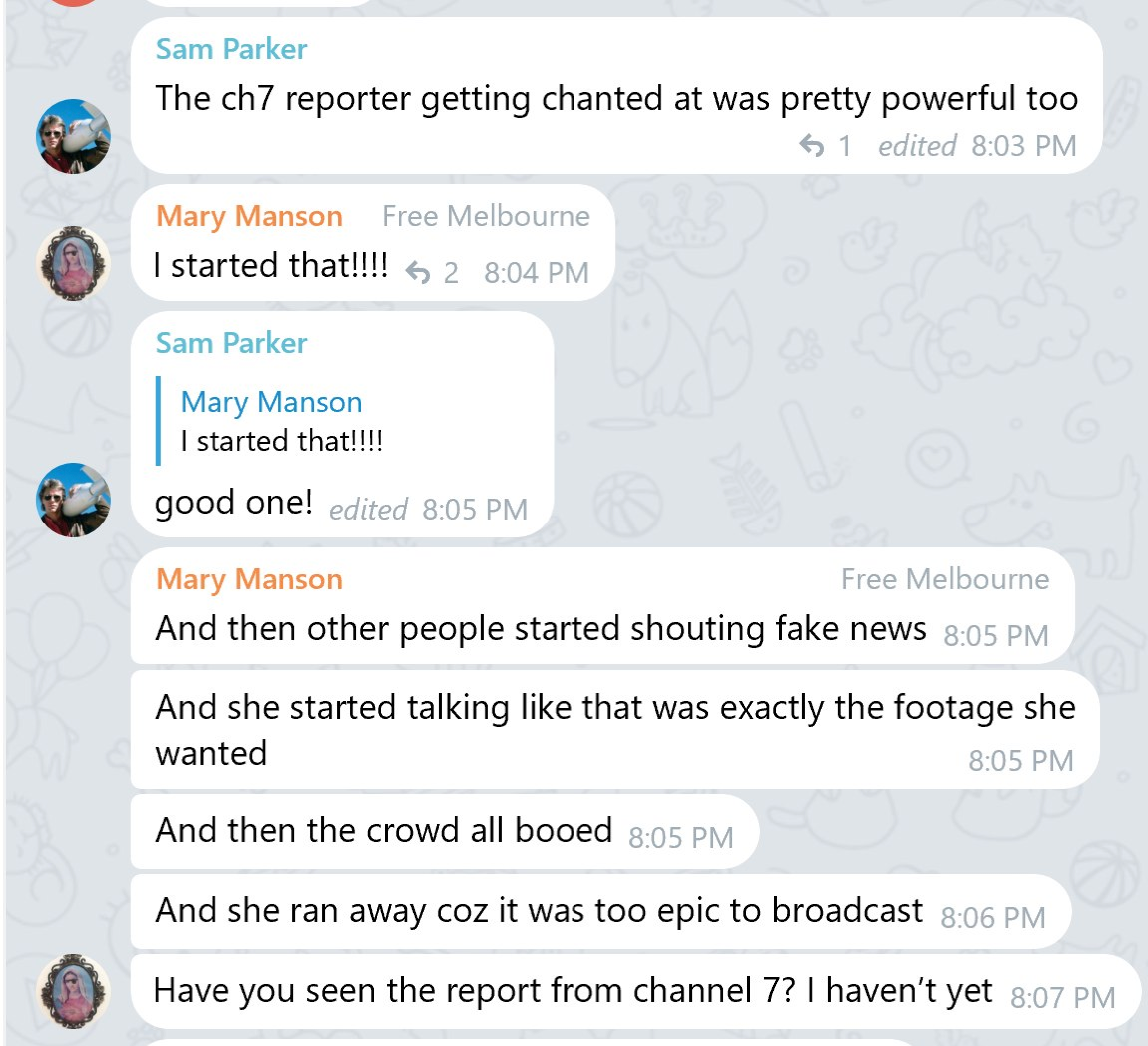 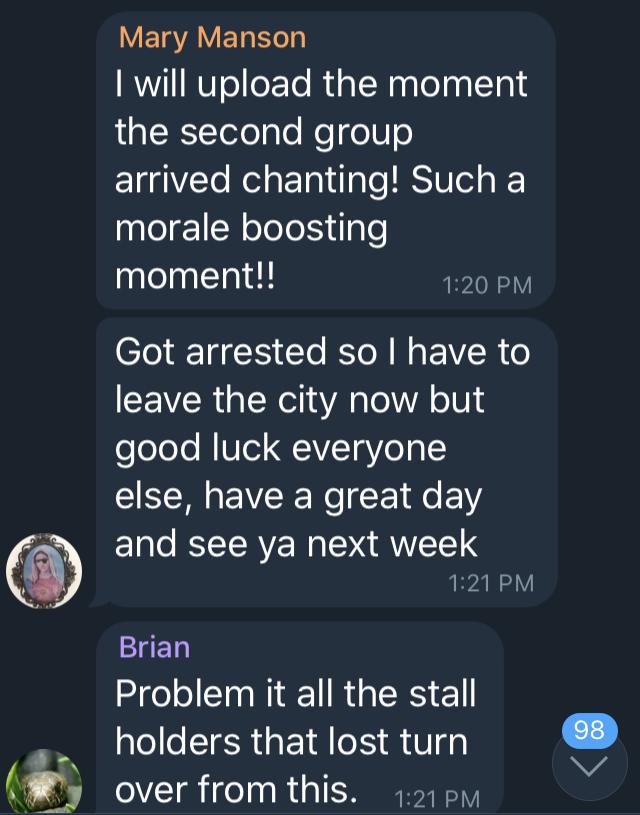 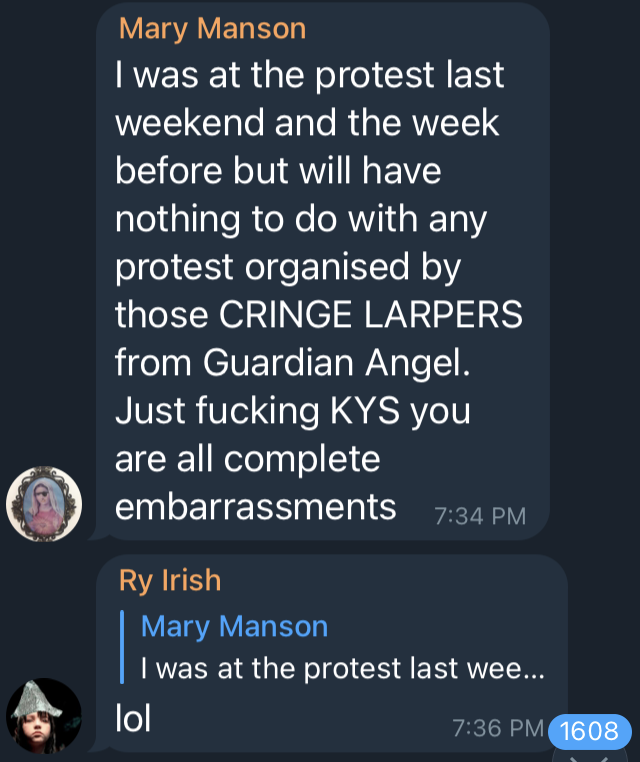 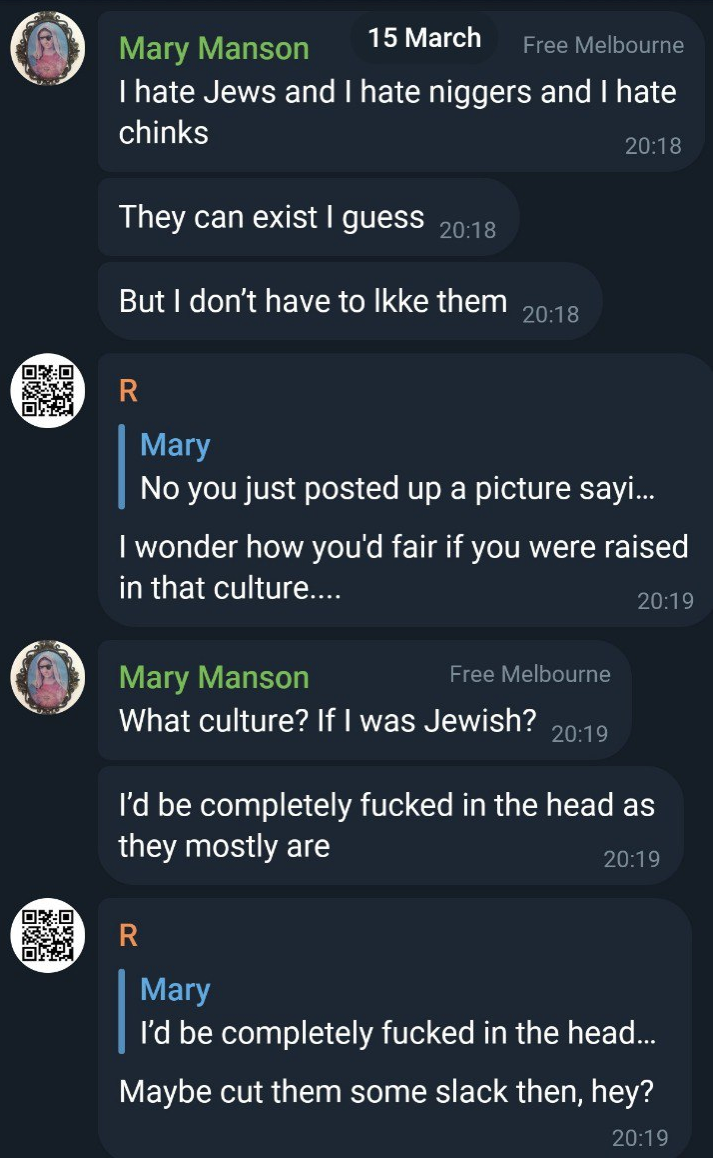 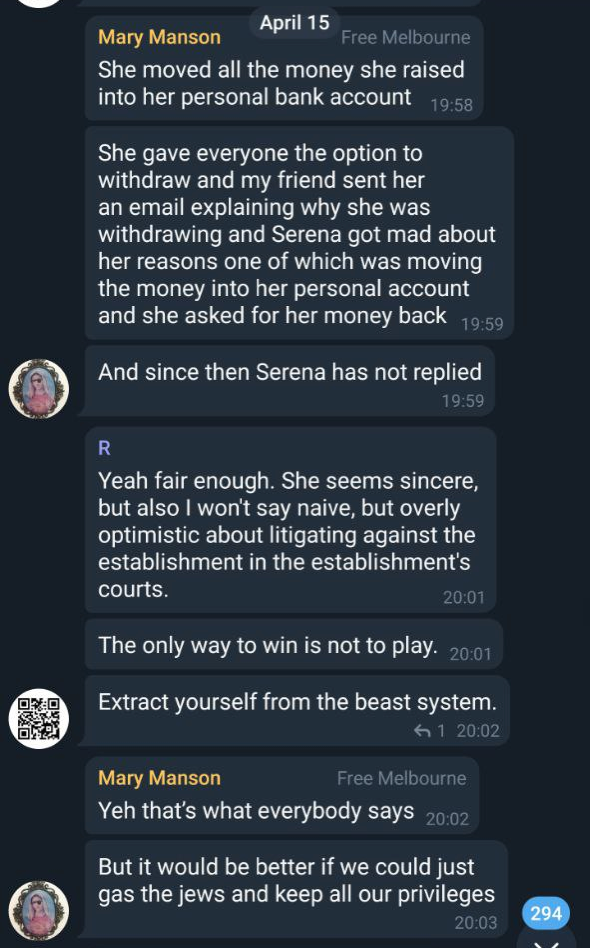 Not even the Greeks were quite white enough for Alice McNamara. 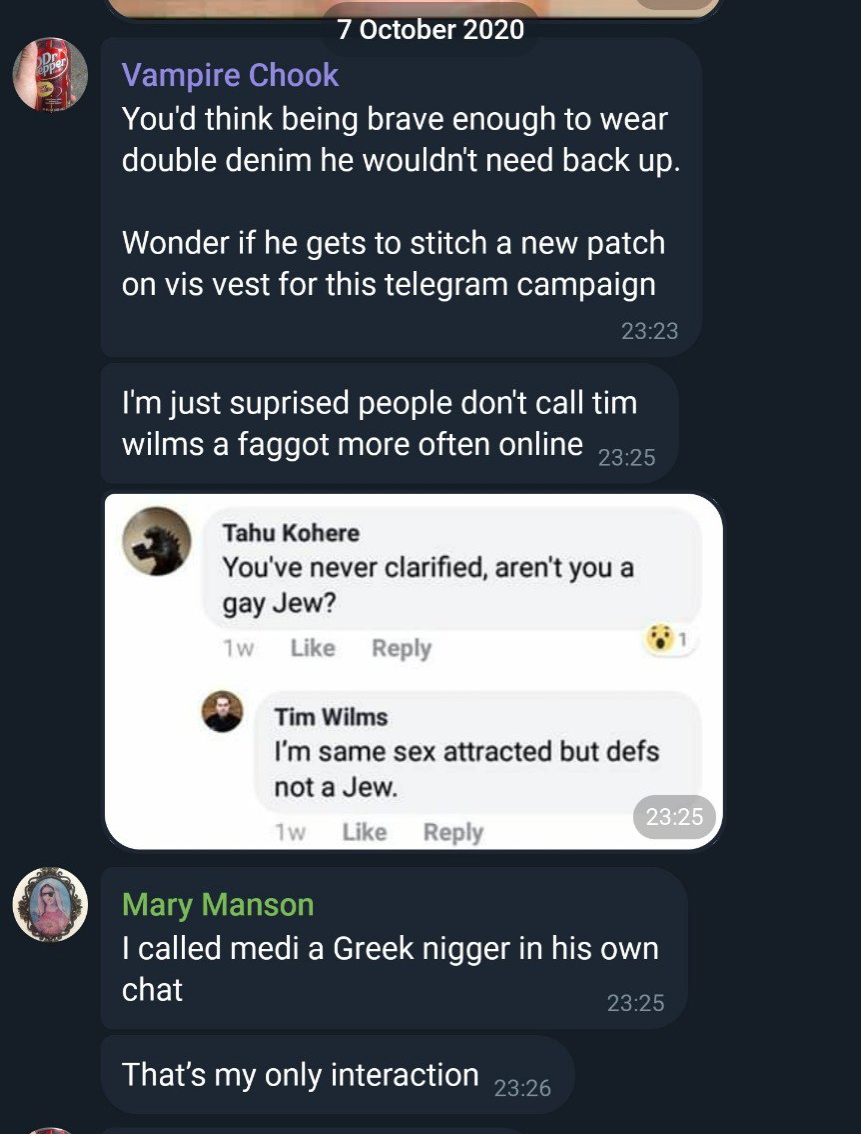 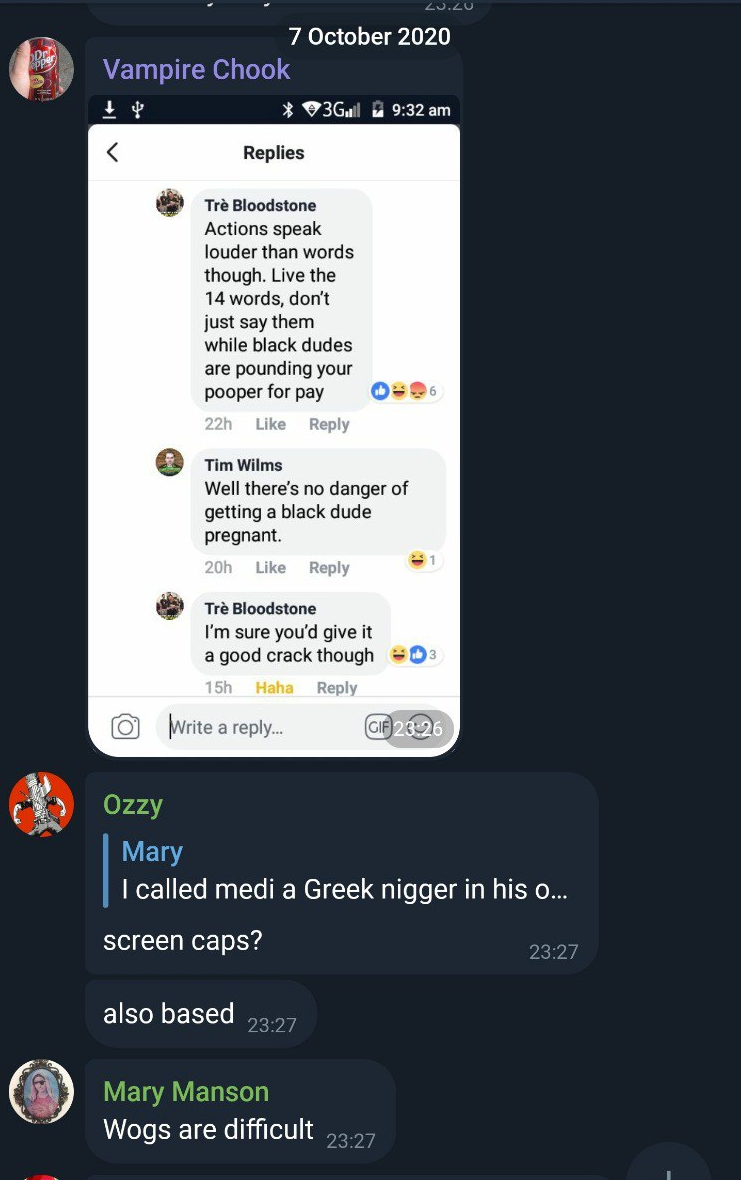 The end of Mary Manson.

Following contact from Nine Fairfax, Alice has changed her name on Telegram.